Virtually everything we know about protein conformation comes from experiments performed in environments that do not resemble the biological context of proteins in action. Our data generally come from solutions that lack the significant array of salts, sugars, and metabolites that fill the cytosol of living cells, and often these data are acquired at a pH far removed from cytosolic. In addition, the dilute solution conditions used in almost all structural biology experiments do not capture the crowding and excluded volume effects that are likely to play a role in determining protein conformation in densely-packed cellular environments. As techniques in biology and NMR have advanced, however, the determination of protein structures in living organisms has become possible, despite the significant challenges. This week in Nature, a research team from several institutions in Japan and Germany reports that they have solved a high-resolution NMR structure of a protein in the cytosol of living E. coli bacteria (1).
The authors chose a relatively small and simple protein to work out their technique, in this case a 66-residue metal-binding protein from a thermophilic organism. They expressed the protein in E. coli using standard methods, exchanging the bacteria into isotopically-enriched media once they reached the appropriate density for induction. At the end of the induction period, the bacteria were gently centrifuged, resuspended into a thick slurry, and put in an NMR tube. Samples produced in this way were stable for about 6 hours, which is generally not enough time to perform the kinds of 3-dimensional experiments necessary for NMR structure determination.

To get around this problem, the authors used non-linear sampling and maximum entropy processing. This approach allowed them to reduce the number of data points they took, without losing much of the frequency discrimination that is vital to successful NMR. In this way they were able to compress the essential assignment and structural experiments to about 3 hours, although they found it necessary to repeat experiments and add them together in order to get enough signal to proceed. In order to ensure that the data were not contaminated by sample degradation, they ran short two-dimensional experiments to check sample quality in between the 3-D spectra. With this approach they managed to take 9 assignment spectra, several relaxation spectra, and several NOESY spectra for structural data. Apparently, each spectrum required its own, new sample due to the short lifetime of the bacteria under these conditions.

The authors performed control experiments in order to address some of the problems that affected previous research on proteins in living E. coli. They found that removing the cells from the NMR tube eliminated most of the protein signal, and that lysates of the bacteria contained protein signal. These experiments showed that the data collected in their experiments genuinely came from protein inside the bacteria rather than protein that had leaked out. 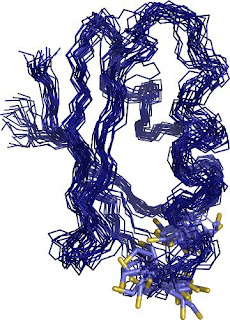 After all this work, the authors were eventually able to solve a structure of TTHA1718 in live E. coli, which you can see to the right (explore this structure at the PDB). This result would not have been possible, however, had the authors not employed specific methyl labeling in order to get additional long-range restraints, a technique typically used for very large proteins. As you can see in the supplementary information, attempts to solve the structure without the methyl NOEs gave rise to a fairly disordered ensemble. Even this ensemble is nowhere near as tight as the in vitro structure that the authors also solved. Because the in vivo structure used many fewer NOEs than the one from dilute solution it is difficult to tell whether differences between these ensembles reflect real conformational changes or simple uncertainty. The loop near the metal-binding cysteines (shown as fat sticks in this image) is a case in point — it looks quite different from the solution structure, especially in the positioning of the critical side chains, but there are almost no NOE restraints for this loop in the in vivo structure (Figure 4e). Chemical shifts support the idea of a conformational change, and inside the cells many of the signals in that region are too broad to detect. This, in conjunction with some metal-enrichment experiments the authors performed, suggests that the protein is regularly binding to metals in vivo, but the structure of this bound state is essentially a mystery. There are also a few clear structural differences in well-defined regions of the protein, but their significance is also unclear at this time.

This experiment serves as proof of principle, but NMR spectroscopists weary of years of promising experiments that turn out to only work on ubiquitin might rightly question whether this approach has any further applicability. In order to address this, the authors expressed the protein to a lower level in order to demonstrate that the procedure could still work for less-concentrated proteins. In addition, they show spectra from calmodulin in the supplementary data, suggesting that this approach will at least be applicable to proteins up to the 20 kilodaltons. However, the relaxation data the authors show in the supplementary data indicate that tumbling in the bacteria is significantly slower than in dilute solution, and the T2 of the protein is 5-6 times shorter in vivo. If this result is general, then structural work on larger proteins may not be possible.

Why did this experiment work when other experiments on globular proteins in E. coli have led to leaking protein or an absence of signal (2)? Part of this may be that not all E. coli are created equal: the authors of this study used the JM109(DE3) rather than the popular BL21(DE3) strain. Genetic differences between the cells used may be responsible for the altered outcome. This will be a difficult thing to nail down, however, as overexpression typically involves the introduction of foreign DNA, an antibiotic, and an exotic activator of some kind, not to mention that isotopic labeling requires nutrient-poor minimal media. The difference between CI-2 that leaks out of cells and TTHA1718 that stays in may be as simple as the amount of magnesium sulfate in the M9. Until the factors causing the excretion of overexpressed proteins are more fully understood, careful controls will be an absolute necessity of in vivo experiments.

Because of the difficulty and expense this is clearly not an approach to be taken up lightly. For the time being, at least, you want to save this sort of experiment for systems where there is a real inconsistency between structural data from dilute solutions and results in vivo. As we improve the NMR approaches and increase our ability to manipulate E. coli behavior, however, this technique will grow more powerful and broadly applicable. Moreover, the Japanese part of the team reports in the same issue of Nature that they have managed to acquire spectra from proteins transferred into cultured human cells (3). This suggests the possibility of purifying labeled proteins at high yield, transferring them into living human cells, and then monitoring their structural and dynamic properties in their biological context.