My field-cycling article (previous post) is part of a dynamics-focused topical issue of JBNMR. In my next few science posts I’ll describe some of the other contributions.

Research into the interplay between protein structural dynamics and function is a window into important fundamental knowledge about biochemistry, but the general justification for public funding of these studies by medical agencies is that they will have the ultimate effect of improving our ability to design and optimize drugs. However, even though our ability to characterize macromolecular dynamics has increased dramatically in the past few decades, there are few, if any, cases in which this knowledge has been applied successfully to the design of therapeutic agents. In part this is because incorporating data on fluctuations into the design algorithms poses a significant challenge. It’s also true, though, that we understand only part of each system, i.e. the dynamics of the protein target, not the small molecules it binds. If dynamics studies are to make the maximum possible contribution to pharmaceutical sciences, the motions of the ligand must be characterized. In their article in Journal of Biomolecular NMR, Jeffrey Peng and students from Notre Dame attempt to address this shortcoming in the case of a substrate for the phosphorylation-directed prolyl isomerase Pin1.

Pin1 is implicated in a number of regulatory and signaling pathways, which seems strange because it doesn’t possess any intrinsic transcriptional regulation ability, nor does it covalently add or remove phosphate groups. Instead, Pin1 has an enzymatic activity that accelerates, generally without altering the relative populations, the conversion of prolines from their cis- to trans- state and vice versa. This activity is specifically targeted to prolines that are adjacent to phosphorylated serines or threonines. In addition to the catalytic domain that does this work, Pin1 possesses a WW domain that has identical specificity. Because Pin1 does not alter the balance between cis- and trans- Pro, only the rate at which one changes to the other, its role in signaling has been difficult to ascertain, although there is intense interest in this area.

You don’t need to understand an entire pathway to design an effective inhibitor. What you do need to understand is the relationship between specific chemical groups and binding affinity. Getting that knowledge can be very difficult if the proposed drug is flexible. In that case, refinement methods that focus only on the particular chemical groups rather than their dynamic properties could go badly astray. Unfortunately, the dynamics of protein-bound drug molecules are difficult to measure. Their proton signals are likely to be swamped by the protein, and small molecules are often difficult to label with isotopes convenient for NMR. Peng et al. propose to address this by studying 13C relaxation at natural abundance.

A little less than 99% of the world’s carbon is in the form of NMR-inactive 12C, which is a problem for NMR because carbon is very abundant in proteins and drugs. Of the rest, most (about 1% of all carbon) is dipolar, NMR-detectable 13C, which is usually not enough to accomplish anything in terms of protein NMR. As a result, NMR researchers typically adopt the strategy of expressing their proteins using bacteria grown in media containing 13C6 D-glucose. Such enrichment of drug molecules probably could not be carried out for pharmaceutical research due to the cost and the limited availability of properly labeled reagents. Fortunately, advances such as magnets stronger than 17 T and cryoprobes make sensitive detection of natural-abundance 13C a plausible approach. Because natural-abundance measurements also simplify the experiments and analysis considerably, Peng et al. adopt this approach in their study.

Peng et al. measure μs-ms fluctuations in a 10-residue peptide in the presence and absence of Pin1. Keeping in mind that such motions can only be detected when they are associated with a change of chemical shift, it is reasonable that no such motions are detected when the peptide is all by itself. In the presence of Pin1, however, methyl groups on phospho-Thr 5 and Val 7 experience some kind of chemical exchange process on the order of several 100 /s (at 278 K), as does a methylene group in Pro 6. 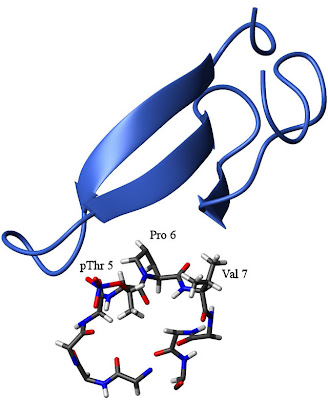 Peng et al. rationalize their observations with reference to a previously-determined structure of the Pin1 WW domain in complex with this peptide (explore it at the PDB). As you can see from the lowest-energy member of this NMR ensemble (left), the residues where they detect these fluctuations in the methyls and methylenes are those that are most involved in the binding interaction. The WW domain is represented as blue ribbons, while the peptide is shown as sticks down at the bottom. That the Pro and pThr form part of the interface is unsurprising, as they constitute the specific binding sequence, while the Val side chain appears to be in position to make some hydrophobic contacts. Everything makes sense, but that doesn’t mean it’s telling us what we want to know.

The structure above shows us the interaction of the peptide with the WW domain, while what we’re really interested in getting at is the catalytic domain. Using an exchange spectroscopy experiment, Peng et al. determined that the ms dynamics they were observing probably reflected the binding of the peptide to the WW domain. To avoid this interaction, they created an artificial Pin1 that contained only the catalytic domain, and found that this also caused chemical exchange in the methyls and methylenes. Cross-checking against the exchange spectroscopy rates suggested that the ms dynamics in this case reflect the result of Pin1 catalytic activity, namely the interconversion from cis to trans and vice versa.

Unfortunately, this experiment did not report the most desired data, i.e. the dynamics of the ligand on the enzyme. On-enzyme fluctuations certainly contribute to the exchange experienced by the ligand, but because the on-enzyme population is so small (at most 2.5% of ligand) this would only be detectable in the case of an extremely large change in chemical shift. In principle one could deconvolute the dynamics from a partial-occupancy system where 50% or more of the ligand is bound to enzyme, but reliably fitting all the parameters for a two-state chemical exchange system from CPMG data is an already-dicey proposition. Fitting a four-state process from data like these is unlikely to be practical. So, in order to observe on-enzyme dynamics the drug of interest will need be saturated with its target protein, which would require millimolar protein concentrations for most ligands. Under those conditions, the spectra will also contain significant signal from the protein. The 70% deuteration used in this experiment, combined with 13C depletion, will probably be enough to suppress this, although these isotopes will increase the cost of the technique (and diminish protein yields).

Nevertheless, this paper establishes that the natural-abundance approach to measuring ligand dynamics on the µs-ms timescale is feasible. Because methylenes and methyls are common moieties in drugs and small molecules this technique may have broad applicability. Investigating the motions of small molecules bound to large proteins poses a unique problem because these systems don’t have the advantages of either small molecules (low R2) or proteins (exotic labeling schemes). The ongoing work of Peng et al. suggests that this problem is tractable, which may have positive consequences for our ability to design and optimize drugs.