Loads of interesting stuff is going on in Alzheimer’s research right now. While the hot news is about a trial showing significant benefits from going after tau tangles, a recent paper in PLoS ONE continues to investigate the pathology of the amyloid-β peptide. As I’ve mentioned in previous posts, cleavage of the amyloid precursor protein to a 42-residue peptide (called Aβ1-42 in this paper) initiates the formation of peptide oligomers and eventually plaques. Recent research has indicated that these oligomers are sufficient to cause the development of Alzheimer’s disease, but the mechanism by which they do so remains uncertain. Sara Sanz-Blasco and colleagues show that Aβ oligomers disrupt calcium homeostasis in neurons, damaging the mitochondria and promoting apoptosis, and that certain NSAIDs can suppress these adverse mitochondrial effects (1). PLoS ONE is open access, so go ahead, open the article up in another window, and follow along.
Although the appearance of plaques and neuronal death are classic hallmarks of Alzheimer’s pathology, the relationship between these features is not well understood. For instance, it is possible the plaques themselves kill neurons or impair neural function. However, it seems equally likely that the appearance of plaques and the death of neurons are two distinct effects with a single cause. This view is supported by the oligomer toxicity study, but that study fails to resolve the question of exactly how Aβ oligomers kill neurons. Previous work has associated Aβ with derangement of cellular calcium (Ca2+) management — a 2005 paper by Demuro et al. (2) showed that soluble Aβ induced an increase in intracellular Ca2+ in a neuroblastoma cell line. Sanz-Blasco et al. therefore decided to directly test whether Aβ oligomers were increasing Ca2+ levels in neurons, and specifically in mitochondria. In order to do this last bit they used a low-affinity aequorin targeted specifically to mitochondria.

Allow me digress… to many of my readers that probably sounds like a terrible idea. If you’re trying to detect a particular chemical in the cell, it seems like the best thing to do would be to get a high-affinity binding partner. And if figuring out whether there is any calcium in the mitochondria is what you want to do, then a high-affinity detector makes sense. However, when you’re using a small amount of a sensor to detect changes in the concentration of a large amount of ligand, a low-affinity sensor is what you want. 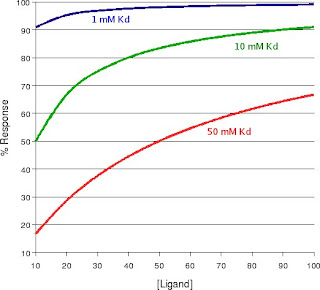 To see why, take a look at the graph on the right. This is just a rough calculation based on a situation where the detector is at a concentration of 100 µM and the concentration of its ligand (that you’re trying to detect) changes from 10 mM to 100 mM. Note that the concentration of the detector is at most 1% that of the ligand. If the dissociation constant KD of this complex is 1 mM (blue) (a lower KD means higher affinity), then the detector is almost saturated when you start, and the percentage occupied doesn’t change very much over the course of the experiment. This means that it will be very difficult to tell the difference between, say, 50 mM ligand and 100 mM ligand, because that amounts to a signal difference of 1% of the maximum response. The situation gets a little better if the KD is 10 mM (green). The lowest affinity detector here (KD = 50 mM, red) actually does the best job of distinguishing between 50 mM and 100 mM ligand, because the difference in response amounts to 17% of the total dynamic range. Ideally, you want to tune the KD of your detector in such a way that its response to changes in ligand concentration is large and linear over the range you are likely to be observing. For the last detector, this range lies between 10 and 40 mM of ligand, so that would likely be the ideal range to investigate with it.

The precise numbers are different in the present paper, but the principle is the same. The affinity you want in your detector will depend on what you are trying to detect and the circumstances under which you are trying to detect it. In this case, the researchers are trying to measure changes in calcium ions over a fairly wide range, which have a pretty high concentration in mitochondria, and they’re doing it using a luminescent protein, which isn’t very concentrated. As a result, a relatively low-affinity detection system is best.

So, what did they find? The results in Figure 1 show that Aβ oligomers and fragments cause an influx of calcium into the cytoplasm of cultured neurons, but preparations of Aβ fibrils did not cause this effect. Moreover, exposure of the cells to Aβ oligomers caused a clear influx of calcium into the mitochondria (Figure 3). This is a problem for a cell because Ca2+ overload in mitochondria can cause programmed cell death, or apoptosis. Using the classic TUNEL assay, the authors of this study showed that the Aβ oligomers caused apoptosis. In addition, they showed that treatment with the oligomers caused the release of mitochondrial cytochrome c (a step in the apoptotic pathway) and that the addition of cyclosporin A, which inhibits the release of proteins from the mitochondrion, blocked cell death (Figure 4). Together, these pieces of evidence support the idea that Aβ-induced Ca2+ influx into the mitochondria activates the apoptotic cascade, leading to neuronal death. These results are consistent with a very cool study published this week in Neuron (3) showing that amyloid plaques correlated with high neuronal Ca2+ levels in vivo (in live mice).

On its own this is pretty interesting, but Sanz-Blasco et al. push it a bit further. Because they had shown previously that some NSAIDs prevent mitochondrial Ca2+ uptake in a cancer cell line, they decided to find out if they would work in this instance, too. As you can see from Figure 6, the three NSAIDs tested kept the mitochondria calcium-free, even if the cells were treated with Aβ oligomers. NSAIDs also prevented cytochrome c release and cell death (Figure 8).

Some readers may recall that Kukar et al. showed that certain NSAIDs prevent oligomerization of Aβ1-42, hinting at a possible explanation of these results. However, the controls performed by Sanz-Blasco et al. show that under the conditions of these experiments the NSAIDs they used have no effect on cytosolic Ca2+ concentrations (Figure 7). If it is amyloid oligomers that let Ca2+ through plasma membranes, then this would appear to rule out structural disruption as a mechanism. Instead, Sanz-Blasco et al. propose that these NSAIDs specifically alter the polarity of the mitochondrial membrane in such a way as to prevent Ca2+ uptake.

If this is true, then NSAIDs may be able to perform a double-whammy on Alzheimer’s disease. On the one hand, they appear to be capable of altering Aβ cleavage patterns to reduce the formation of toxic oligomeric precursors. In addition, they appear to have an ability to block mitochondrial breakdown and subsequent apoptosis directly. While this is encouraging, and speaks to the value of pursuing refinements of existing NSAIDs as possible Alzheimer’s treatments, this experiment doesn’t necessarily prove any therapeutic value. Even if the neurons are saved from death, the calcium flood may impair their function to such a degree that their continued survival doesn’t matter. Only clinical trials and further research can firmly establish whether current or optimized NSAIDs can provide significant protection against Alzheimer’s disease.

5 Responses to “NSAIDs vs. Alzheimer’s: Multiple modes of action?”