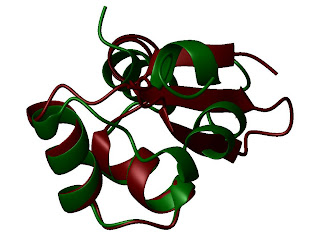 A few weeks ago, when I posted on the transitive homology studies performed by the Cordes group, I promised a closer look at the structures when they became available. If you’ll recall, one of the central findings of the Roessler et al. paper (1) was that the Xfaso and Pfl 6 Cro proteins, though they had 40% sequence identity, as well as an identical function, had very different structures and dimerization characteristics. The Pfl6 Cro structure is now available in the PDB, and Dr. Cordes was kind enough to send me the Xfaso Cro structure, which has been held up by some technicalities. I made the overlay of the structures to the left, with Xfaso in dark green and Pfl 6 in crimson. As you can see, the N-terminal helix-turn-helix motifs of the two molecules overlay very precisely, with some slight differences in orientation in the context helices. The C-terminal portions, of course, are completely different. How did they get to be this way? 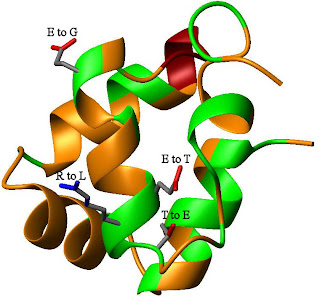 Well, I have a few thoughts. To achieve a significant change in structure like we have here, two possibilities suggest themselves. We can destablilize one structure, or we can stabilize the other. So let’s try to look at this from both angles. First, the Xfaso structure, which is on the left. The ribbon is orange for residues that don’t change between the two proteins, green for mutated sites, and red over a deleted range. I’ve also drawn in a couple of the mutated side chains that might have an effect. For instance, at the upper right you can see a glutamate of Xfaso Cro that becomes a glycine in Pfl cro. The presence of the glycine may destabilize the helix. Lower on the helix, a solvent-exposed arginine becomes a hydrophobic leucine in Pfl; likely the structure will change to reduce the contact of the leucine with water. By the same token, a partially-buried threonine at the base of the helix gets mutated to glutamate. Not only might this put an unsolvated negative charge inside a hydrophobic region, but favorable helix-capping interactions of the threonine might be broken. Roessler et al. also point out that a pair of cysteines in the Xfaso structure are in a favorable position to form a disulfide bond; both are absent from the Pfl6 sequence.

On the other side of things, what mutations are stabilizing the new fold of Pfl 6 Cro? Check out the image below, color-coded the same way as the previous structure: 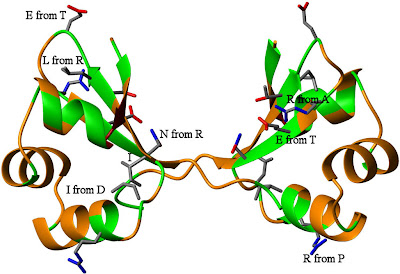 There are a couple of things going on here. First, the hydrophobic residues. The leucine that was an arginine in Xfaso Cro has indeed been buried, up at the top of the structure. Nearby, the glutamate that was a partially-buried threonine in Xfaso is now fully solvent-exposed. In the same vein, an aspartate has become an isoleucine near the middle. This new isoleucine appears to pack into the core of the companion protein near a conserved isoleucine (and a new methionine), and probably accounts to some degree for the stability of the dimer. There are a wealth of minor effects too—an alanine to arginine mutation has created a charged group that is solvent stabilized on one of the strands; down near the bottom a proline-to-arginine change probably has allowed the extension of a helix. Some other side-chains are drawn that I was taking a look at, but probably aren’t critical, and of course I’ve probably missed a few that matter.

The R→L, T→E, and D→I mutations probably do a great deal to change the most stable conformation from all-α to α/β and strengthen dimerization in solution. However, just from looking you can never be sure what mutations are the most important. Doubtless the Cordes lab is already examining which residues are critical in altering the conformation. It will be interesting to see whether point mutations tend to move Xfaso from the all-α to the mixed structure, or whether they produce molten globules.