If you wanted to keep someone from driving off in their car, how would you do it? There are some obvious answers: you could put some kind of blockage in front of and behind it, or you could slash the tires, or you could damage the engine, or you could empty out the gas tank. All of these approaches directly interfere with the mechanisms that allow the car to move. Alternately, you could take a more indirect approach: you could break the doors so they don’t open, or remove the steering wheel, or take out the brake and accelerator pedals, or remove the stickshift. None of these latter approaches make it impossible for the car to move — the engine and wheels still function — but by removing the means that allow human beings to control the car these approaches still manage to ensure that the vehicle cannot be driven.
The traditional approach in structure-based drug design is to attempt to block the active site of a protein or important interacting sites, analogous to the “direct” approaches I outlined above. By adding a lump of stuff that obstructs enzymatic activity, ion transport, or (more recently) binding interactions these drugs attempt to interfere directly with the biochemistry of the target protein. This approach has been pretty successful, and certainly no reasonable person would want to depart from it, but there are some weaknesses here. For one thing, many diseases don’t originate from enzymes or ion channels, and developing drugs that obstruct binding interactions can be pretty tricky.

Imagine your disease arises in the following system. You have some kind of receptor (R in my little cartoon over to the side there) that can bind a ligand (L). Binding of L activates R in some way so that it can bind to a partner (P) and this causes some gene to be activated. This cartoon roughly represents the way in which hormone receptors (like for estrogen or testosterone) function. Now, suppose something has occurred to derange this system: perhaps too much of L is being made, or R and P have been aberrantly expressed in some tissue where the gene they activate is toxic or causes inappropriate cell proliferation.

If we come at this by the conventional approach of targeting the L-binding pocket, we have a problem, because any drug that has an affinity for R high enough to displace the natural ligand is likely to produce the same or similar conformational changes that cause P to bind. We could, of course, try to develop a drug that interferes with P’s binding directly, but this approach has its own problems. For one thing, these binding surfaces are often quite large and highly structured, features that are often difficult to replicate with a small molecule. You can create a drug that inserts itself into the site somehow and gets in the way of P binding, but it’s not always possible to design such an agent that specifically hits only your protein. A peptide mimic of R might work, but these are also difficult to deliver. 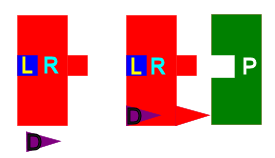 But there’s another strategy that might work, too. Rather than try to block R from binding L or P directly, what if we could cause some other change in R that prevents P binding whether or not L is around? Just like removing the accelerator or stickshift from the car of my example, this doesn’t directly block either function of the molecule. R can still bind L, and the binding surface P interacts with is still present. However, our drug (D) has caused a new change in R’s conformation that prevents the binding of P. A simplified cartoon is at left. 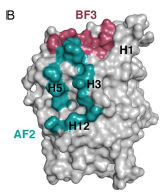 This is precisely what seems to have happened in a study on the androgen receptor (AR) appearing the October 9 issue of PNAS and reported by Eva Estébanez-Perpiña and coworkers from UCSF and St. Jude’s. Interestingly, this group of researchers was initially seeking to produce a direct inhibitor — in this case, a drug that would bind to the part of AR that interacts with its coregulators. This interaction is therapeutically interesting because aberrant AR activity plays a role in prostate cancer, among other things. Several promising compounds were found that produced substantial inhibition of AR activity at relatively low concentrations. The surprise was that only some of these preferred to bind the targeted site (AF-2). Instead, a number of them were found to locate preferentially to a previously unsuspected site at the top of the molecule, now called binding-function 3 (BF-3), which you can see in the figure I shamelessly stole on the right here.

The reason that this appears to work is that binding to BF-3 changes the structure of AF-2, via an allosteric interaction. Rather than directly getting in the way of the essential reaction, the drug acts at a distance to disrupt the binding surface. Although much still needs to be done to refine these lead compounds into usable drugs, this is a significant demonstration that such an approach has therapeutic potential. In this case, the discovery of allosteric inhibitors was made by accident, but as our understanding of protein structure and allostery improves, expect to see more efforts to approach drug design in this way.