This is the last of my series of posts about the dynamics-focused topical issue of JBNMR. There are plenty of other excellent papers in it, and I encourage you to at least glance over all of them, especially if you’re an NMR person.

Standard NMR dynamics experiments on isotropically tumbling proteins cover a wide, but not comprehensive, swath of fluctuation timescales. Limited information about motions that take milliseconds or more can be obtained from hydrogen exchange data; the AMORE-HX experiment is meant to obtain this kind of information. Fluctuations with time constants in the range of μs-ms can be measured by relaxation-dispersion experiments, as were used in the Peng lab’s paper. Motions that are faster than the rotational correlation time of the protein can be characterized using dipolar relaxation data of the kind I collected for the field-cycling experiment. There are additional kinds of data that also cover these areas, but the glaring hole lies between the correlation time of the protein (several ns) and the low end of the chemical exchange regime (several μs). Several teams, including that of Christian Griesinger, propose to fill this gap using data derived from residual dipolar couplings (RDCs). In the topical dynamics issue of the Journal of Biomolecular NMR, his group demonstrates the use of this technique in measuring the dynamics of side chains in the small protein ubiquitin. The article is open access, so feel free to open it up and read along.

The strength of the dipolar coupling between two nuclei depends on their magnetic properties (specifically their gyromagnetic ratio), the distance between them, and the angle between the internuclear vector and the vector describing the external magnetic field. For solution NMR this last component is typically not important because most proteins tumble randomly with respect to the magnetic field, causing this interaction to be averaged away. However, if you were to somehow introduce a tiny amount of bias into the tumbling, very slightly aligning the protein parallel or perpendicular to the magnetic field, a residual portion of this coupling could be recovered. The effect is considerable: a net alignment of less than a fraction of a percent generates couplings on the order of 30 Hz or more.

There are many ways of inducing this alignment. Large charged particles such as phage or DNA nanorods have been used, as have assemblies such as charged or polar lipid bicelles. In addition, proteins can be labeled with paramagnetic metals to induce fractional orientation. Even mechanically manipulated media, such as acrylamide gels, can be used to achieve alignment if they are stretched or compressed along the field axis. When a new method of alignment is introduced, it is typically tried out on a small, abundant protein with good relaxation characteristics, most often the regulatory protein ubiquitin. The upshot of this is that there is a fantastic amount of RDC data on this protein, and Griesinger’s group uses this data to model the motions of its methyl-bearing side-chains.

This may sound strange, because RDCs are typically employed for structure determination. The angle defined by the measured coupling results from the overall tumbling bias of the protein (an alignment tensor) that is the same for each coupled pair, and their angle within that frame of reference, which can be used to uniquely define a structure. However, the dipolar coupling cannot be measured in an instantaneous fashion. It must evolve over time, just like chemical shift or a J coupling. As such, the dipolar coupling reflects an averaged orientation over the evolution period. In principle, the degree of averaging can be modeled as some kind of order parameter, similar to the S2 of the Lipari-Szabo system, reflecting all these motions. This should encompass not only the fast dynamics that determine dipolar relaxation rates, but also motions slower than the global correlation time, up to near the ms range. 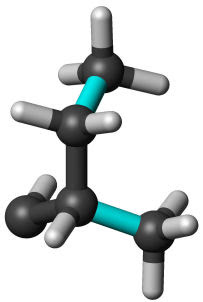 In order to derive dynamics data from their set of experiments in 13 different alignment media, the authors first scaled the RDCs from C-H methyl bonds. The reason they did this is that the three hydrogens in a methyl group rotate constantly around an axis passing through the adjacent C-C bond (cyan in the isoleucine side chain depicted at right). Because this rotation is typically very fast, simple to model mathematically, and pretty uninteresting, it can be deconvoluted from the dynamics data to give us what we’re really interested in, the behavior of the C-C bond. Using an alignment tensor derived from a separate dataset of N-H RDCs in 36 different alignment media, the calculated C-C RDCs are combined into a matrix, from which simplified parameters describing motion can be derived. Fig. 1 depicts this schematically (note, the legend has the variables m and i reversed in meaning).

The order parameter (S2rdc) reflects the rigidity of the bond and ranges from 0 (highly flexible) to 1 (perfectly rigid). The values measured for the methyl groups of ubiquitin cover almost this entire range (Fig. 2a), which is typical of side chains which tend to have less constrained motions than the backbone. It’s also evident from this figure that S2rdc is roughly anticorrelated with the number of dihedral angles between a given methyl group and the peptide backbone. The anisotropy of motion (ηrdc) is generally low, and appears to be roughly correlated with the number of intervening dihedrals. Both of these observations agree with previous data from other dynamics experiments, as well as reasonable expectations about the movements of these groups.

Farès et al. compare their S2rdc to order parameters determined using other approaches. As one would expect, for most methyls the S2rdc, which encompasses motions from a wide array of timescales, is lower than the S2 determined using a Lipari-Szabo model-free approach that is only sensitive to ps-ns motions. The most notable exceptions are three residues for which the RDC method fit order parameters greater than 1. Probably these represent some unanticipated failure of the model, although these violations occur at groups that are expected to be rigid (two are alanines) and which have high S2 from the Lipari-Szabo model. One potential culprit is the previously discussed scaling, which may need to be adjusted if the axial rotation is unusually slow. The best agreement with existing data comes from an approach that combined J-coupling data with less-specific RDC information, but only when those data are corrected for very fast motions using backbone order parameters.

Because the RDC fundamentally contains data about the orientation of a given bond, it should be possible, with a minimal degree of modeling, to extract specific information about the kinds of motions being made, data that cannot be obtained from methods such as the Lipari-Szabo model-free interpretation. The authors modeled side-chain motions around the dihedral angles χ1 and χ2 using the MFA data. The agreement between these results and the existing ensembles is not particularly good, but it’s not completely obvious where the fault for this lies. Similarly there was limited agreement between these order parameters and those derived from existing ensembles. Agreement with the EROS ensemble structure determined last year was good, but it is difficult to judge what this means, as that ensemble was calculated using the same or similar data to what was used in this paper.

It’s fair to ask whether this sort of data analysis will be possible in systems with less comprehensive data. Even this extremely rich dataset proved problematic, for instance in the cases of the alanines and the disagreement concerning rotameric states. It remains to be seen whether this approach will be practical in cases where significantly fewer alignment media can be used. However, it is also true that methyl groups have the best relaxation properties of any group in a protein, and that the experiments for the determination of RDCs are simple and sensitive. This means that if this approach can be made to work, it can provide important dynamic data even in the largest proteins studied by NMR. Farès et al. have performed an impressively comprehensive analysis of dynamics in a time regime that NMR has had difficulty accessing. Hopefully they will next bend their considerable talents towards reproducing as much of this analysis as possible in a more difficult system with sparser data.