A few weeks ago, I wrote that the goal of a structural biology research program ought to be to “characterize the conformation and energy of key, functionally-relevant members of the protein’s structural ensemble and identify the pathways between them.” The Nature paper last week, among other examples I mentioned in the preceding post, described functionally significant minor members of the native-state ensemble, and this is certainly an area where structural studies are making a lot of progress. But what about the other part of that statement, the transition pathways? How are we to study them, and what can we learn about them? Experiments alone are unlikely to tell us everything we want to know about the intermediates between different native structures. We can, however, use simulations validated by experiments to investigate the mechanisms of structural change. Today in Cell, research primarily performed by my coworkers Alexandra Gardino and Janice Velos demonstrates that the bacterial signaling protein NtrC  rapidly samples its active conformation even when it is not phosphorylated. Moreover, they confirm predictions that the intermediates between these two states are stabilized by hydrogen bonds not present in either one. 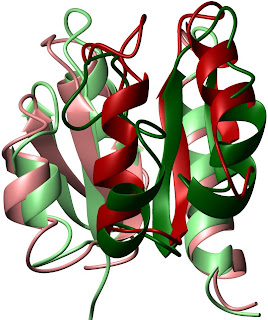 Phosphorylation, or the covalent addition of a phosphate group to a protein, frequently appears as a way of transferring information within a cell. Often this chemical modification is described as a “switch” that flips a protein from an “off” state to an “on” state. The receiver domain of the bacterial protein NtrC (part of the nitrogen-fixing pathway) gets phosphorylated on  aspartate 54 in response to environmental stimuli, causing a change in conformation.  This causes NtrC to switch from a dimer to a hexamer, with the result that it binds to DNA, and eventually activates transcription of target genes. As you can see from the figure on the right, the change from inactive (red, PDB: 1DC7) to active (green, PDB: 1DC8) phosphorylation causes significant changes in the ’3445 face’ of the protein (dark colors), involving changes in not only the position of the helices, but also their length. That means numerous hydrogen bonds are broken and formed during the process, which would naturally lead one to suspect that going from one form to the other takes a while and is difficult to do. Neither is true

That NtrC converts rapidly from its active to its inactive state has been known for some time. Volkman et al. showed in 2001 that the 3445 face experiences some kind of chemical exchange process (2). Moreover, mutations that cause NtrC to become active in the absence of phosphate do not cause it to adopt the active conformation. As shown in Fig. 2e in (1) and Fig. 4 in (2), the NMR spectra for these mutants show peaks that lie partway between the active and inactive chemical shifts. This indicates that the exchange process reflects conversion between the active and inactive conformations in the absence of phosphorylation, and that this process is fast on the NMR timescale. The activating mutations merely shift the relative populations of the active and inactive states. As Janice’s folding experiments in the current paper show, these mutations operate by destabilizing the inactive state, i.e. they make it less energetically favorable relative to the active conformation. By contrast, phosphorylation of D54 significantly stabilizes the active state. However, conformational exchange is still observed in the phosphorylated protein, indicating that the protein samples the inactive state even when it is presumably activated. NtrC is never “locked” into one state or the other.

This description obviously does not jive with the typical language describing phosphorylation as a “switch” that turns signaling pathways “on”. One might well wonder why phosphorylation matters if the unphosphorylated protein can sample the active conformation. Of course, the NtrC receiver domain might not behave the same in isolation as it does when it’s integrated into a whole protein. NtrC signaling in vivo involves communication from the receiver domain to the DNA binding domain, as well as changes in oligomeric state, neither of which are addressed by examining the receiver domain alone in solution. Given that D86N is functionally activating, it’s likely that these results translate to the whole protein, but phosphorylation may still be considered an effective “switch” because of the way it extends the lifetime of the active state. That is, the receiver domain samples the active state occasionally in solution but doesn’t stay there long enough for the full sequence of steps that are required to result in transcription. In this model, the effect of the phosphorylation is simply to hold the protein in its active conformation long enough for the full transcriptional activation to occur.

Talking about lifetimes is all well and good, but that’s a pretty nebulous discussion unless you have some idea of the rates at which these forms are interconverting. The dispersion traces in Fig. 2 show that the rate is fast, so fast, in fact, that a refocusing field of 1000 Hz has a negligible ability to suppress the effects of conformational exchange in the unphosphorylated protein. In order to fit these curves, Alex and Janice had to use an alternative approach to determine the intrinsic relaxation rate. Once they did that, they found that the rate of interconversion exceeded 104 /s for the unphosphorylated protein, but was only around 2000 for the phosphorylated form. How can such a complex process, requiring so many bonds to be broken, occur so quickly? The only way to know is to examine the pathway of transition between the inactive and active forms.

Identifying transition pathways between structural states is a tough problem, though, because the conformations of intermediates and transition states are poorly populated in the solution ensemble. Obtaining a high-resolution structure of one of these states through experiment is essentially impossible, which suggests that our best hope for getting detailed information about the transition pathway is by simulating the conformational changes in the protein. This also presents a problem, however, because these events occur on the microsecond to millisecond timescale, which means that a simulation would need to be on the order of a second long to really sample the relevant fluctuations. Even using hugely parallel computer nodes, however, simulating a protein at equilibrium for as little as a microsecond takes several months. You would need to run such a simulation for years to adequately sample even this rapid of a transition. To get around this time barrier, researchers perform various tricks with their simulations, simplifying the representation of molecules and forces or biasing them so that transitions happen more frequently.

The latter approach was used by Ming Lei in his targeted molecular dynamics simulation of this transition (3) — he applied an external force to the protein in that simulation that pushed it from one state to another. Here some rotation students put in some good work. Aleksandr (you may have noticed that the Kern lab attracts a lot of people named Alex) carefully examined Ming’s simulation to identify unusual interactions and noticed that a number of short-lived hydrogen bonds appeared to be forming, specifically hydrogen bonds that were not present in the active or inactive conformations. Of course, when you include a fictional force pushing a  protein one way or the other you may end up with artifacts in the simulation, so Janice, along with rotating students Ce Feng and Phillip, tested the simulation predictions by generating mutants that were incapable of forming these hydrogen bonds.

As you can see from Fig. 4, these mutations dramatically slowed the conformational fluctuation, confirming the importance of these bonds in lowering the energy barrier of the structural transition. Even though the bonds exist for only a few nanoseconds in the simulation, they appear to play a significant role in lowering the energy barrier. Note, however, that the effect of these mutations is not necssarily additive — the double S85D/Y101F mutant is no slower than either S85D or Y101F alone. This suggests that these hydrogen bonds stabilize the transition pathway at different points, so that different non-native bonds are responsible for lowering the energy barriers of multiple independent steps. This finding has significant implications for efforts to model structural transitions using simplified potentials based entirely on native-state contacts; it is possible, perhaps even likely, that such simulations will miss critical interactions that stabilize intermediates along these transition pathways.

Our ability to successfully design functional proteins will require that we consider not only the structural heterogeneity of the native state, but also how the movement of the protein between different conformational substates can be tuned by raising or lowering the energy barrier between them. Here, NMR experiments have shown how mutations and phosphorylation alter the energy landscape of NtrC and alter the balance between its inactive and active conformations. Moreover, this study validates the prediction from a targeted molecular dynamics simulation that NtrC uses short-lived, non-native hydrogen bonds to facilitate the transition between these two conformational states. Beyond expanding our knowledge of NtrC’s conformational energy landscape, these findings suggest possibilities for other proteins that are activated by phosphorylation, one of nature’s most pervasive signaling methods.