On several previous occasions on this blog I’ve discussed proteins that undergo significant changes in structure without drastic changes in their primary sequence or solution conditions. In some cases, a few mutations can take a protein to a novel fold, as with Philip Bryan’s protein G work. In others, closely related sequences within a whole family populate different kinds of folds, as Matt Cordes illustrated for the case of Cro proteins. In addition, there are some cases such as lymphotactin, where interconversion between two very different structures takes place at equilibrium, as illustrated by Brian Volkman’s research. Each time stories like this come up I have mentioned that this kind of behavior (termed “metamorphism” in a 2008 commentary by Alexey Murzin) suggests a means by which proteins could evolve from one structure to another without losing foldedness or function. Recently, a group from the Weizmann Institute published results in PNAS that speak to this possibility. 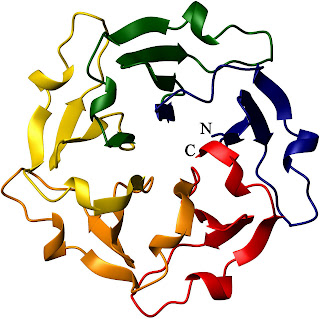 Yadid et al. are looking at a class of proteins called β-propellers. Characteristics of the sequences of these proteins, especially high homology between different blades within a protein, suggest that these proteins are “built up” by gene duplication and fusion from precursors that were either multimeric in nature or made from a smaller number of blades (or both). In particular, they worked with a protein called tachylectin-2, that binds sugars. You can see its structure at right (or examine it at the PDB). The color-coding recognizes that the N and C termini are adjacent to one another, meaning that each “blade” of the propeller actually incorporates one strand from a neighbor. The whole protein is a bit under 250 residues in size. Previously, the authors of this paper had randomly chewed up the tachylectin-2 DNA from either end, a process that one might expect would produce a bunch of useless garbage. Some of the products of this experiment, however, were functional pentamers. But, they were about 100 amino acids long, suggesting that each monomer incorporated two blades. This meant that the structure of the pentamers had to differ from that of the original protein in some key way, but the proteins could not be crystallized due to low yields and instability.

To solve this problem, Yadid et al. performed directed-evolution refinement of the sequences of two promising candidates. From the pool of proteins thus produced they were able to crystallize two, which had interesting properties. As one might expect given the known data, both these proteins formed ten-bladed propellers (the structures have PDB codes 3KIF and 3KIH) in the form of two five-bladed propellers that were linked to each other. In the case of the mutant called Lib2-D2-15, 3 of the 100-residue subunits contributed two blades to the propeller apiece, while the remaining two monomers each contributed to three blades. That doesn’t add up to 10 because each of the two oddballs contributed four strands to one blade, three strands to another, and one strand to the third. That means one blade was uniquely of that monomer and the other two were shared. One of these blades was shoved into the second propeller, generating an asymmetric pentamer. Note also that the two oddballs weren’t equivalent: one was arranged 4-3-1 and the other 3-1-4. The other mutant, Lib1-B7-18, was even weirder in some ways. In that mutant, four of the monomers contributed to three blades in a 1-3-4 manner. The last monomer, however, contributed to four blades, two from each propeller, with a pattern of 1-3-1-3. Because these structures cannot form unless the monomers adopt multiple structures (3 in the case of Lib2-D2-15 and 2 in the case of Lib1-B7-18), it follows that the monomers must be metamorphic.

The evolved fragments didn’t have higher stability to guanidinium hydrochloride than the source fragments, suggesting that the improved expression and solubility was not due to improved stability. The authors argue that the improved expression was mostly due to a change in the isoelectric point of the mutants, which decreased towards neutral in both cases. However, the evolved fragments also were able to refold from the denatured state, which the source fragments could not do. To the authors, this suggests that the directed evolution process actually selected for metamorphism; that is, the proteins were stabilized by an increased ability to sample states that formed productive pentamers.

The observations in this study, although very interesting, do not tell us anything directly about the evolution of tachylectin-2. While it is possible that the current protein evolved from a metamorphic precursor like these fragments, there is no direct evidence that this is the case, nothing to indicate that evolution performed in reverse what Yadid et al. did here. Whether metamorphism contributed to the diversity of β-propeller folds in general, or to the evolution of this protein in particular, remains very much an open question. The metamorphism observed here may be more a consequence of a particularly robust fold tending towards its original state than evidence of hidden metamorphic potential in singular structures. As such, the article’s title strikes me as overbold given the data. That said, it is certainly not implausible that odd assemblies like these pentamers played a role somewhere along the evolutionary path that created the rich library of β-propellers we have today, and this study establishes that even very strange steps along the way can occur without destroying the protein’s function or certain gross features of its structure.