Of all the sources of structural variability in proteins, the hardest to pin down is side-chain conformational heterogeneity. Side chains aren’t always easy to model into their primary conformation in the first place — you need excellent crystal diffraction or NMR data to do it. Even if you pulled that off, it’s not always clear how (or if) side-chain fluctuations relate to a protein’s activity. If we carefully examine our data for the faintest signals, however, we can sometimes find evidence of secondary conformations that play an important role in function. In an article in this week’s Nature, James Fraser, myself, and others show that in the case of the proline isomerase cyclophilin A (CypA), alternative conformations of side chains play a key role in catalysis.
Previous experiments on CypA had established that the backbone amide groups of many residues were sensitive to a conformational fluctuation on the millisecond timescale. Under conditions where this enzyme is saturated with a peptide substrate, the fluctuation rate for some of these residues is very similar to the catalytic rate, suggesting that the dynamics and catalysis are linked in some way (2). Later experiments also showed that this fluctuation was an intrinsic property of the enzyme, continuing even in the absence of substrate (3). What we didn’t know, however, was how the dynamics of cyclophilin were related to catalysis. We couldn’t know, because we had no idea what the motion we were detecting was.

In the case of enzymes like adenylate kinase, there is a dramatic rearrangement of structural elements, and the population of conformations corresponding to the “end points” of that motion can be significantly enriched by altering the amount of substrate present in solution. In the case of CypA, neither of these things seems to be true. Supplementary Fig. 1a (freely accessible from the article page) neatly encapsulates the problem. For this figure, 48 structures of CypA, some with ligand and some without, were aligned, and the variation between them was determined. While there is some variability in the chain conformation, it is primarily limited to a group of residues known to undergo fluctuations that are not related with catalysis (blue chain). The residues involved in the catalysis-related dynamics don’t seem to have much variability, even across this fairly large group. So we can’t trap the unknown, minor state of CypA by adding substrate, and there’s no evidence of an alternate state that explains the NMR data.

Knowing this, we suspected that some kind of side-chain motion accounted for the observed dynamics, probably involving an aromatic group of some kind. Our efforts to gather evidence for this, however, ran into some typical NMR problems — resonance overlap and poor sensitivity exacerbated by chemical exchange. Fortunately, the crystallographers came to our rescue, in the form of Tom Alber and his super-talented grad student Jaime Fraser. Jaime had determined a crystal structure of CypA at cryogenic temperature and analyzed the data using their algorithm RINGER, which examines electron density below the threshold typically considered “noise” in order to identify possible alternative rotameric states of side chains. He found evidence of multiple conformations for a few residues, but nothing that would explain the NMR results. Jaime had the bright idea to redo the experiment at room temperature, which Tom was convinced would result in nothing more than a radiation-damaged crystal and bad diffraction data. 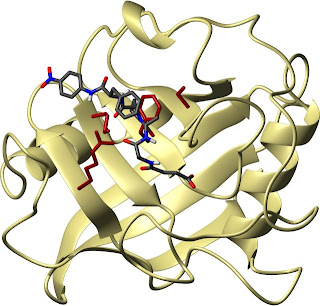 What actually happened was that when Jaime examined the electron density from that experiment he could identify a group of side chains that had more than one conformation in the crystal, which you can see in Fig. 1. These residues included serine 99, methionine 61, and the catalytic arginine 55. Right in the middle of this group was phenylalanine 113, a residue with an aromatic side chain capable of causing changes in chemical shift at relatively long range. For context, the image to the left shows a structure of cyclophilin (PDB code: 1RMH) in complex with the model substrate we used in our own experiments (succinyl-Ala-Ala-Pro-Phe-p-nitroaniline), with the side chains of S99, F113, M61, and R55 in red. As you can see, F113 and M61 form part of the floor of the binding pocket, with S99 rather remote.

So here we have an alternative structure of CypA, hidden below the threshold typically considered when determining a crystal structure. It was certainly plausible that fluctuations in this ensemble of side chains could give rise to the NMR observations, but plausibility isn’t proof. One way to address this would be to try and force CypA to adopt the less-populated conformation. If you look at Fig. 1d you can see that the two conformations of S99 lie at the standard rotameric positions, and that the less-populated rotamer of S99 would run into the more-populated rotamer of F113. So, if you replaced one of the side-chain hydrogens of S99 with a methyl group (i.e. mutated the serine to threonine), that might push the other residues of this group into their minor conformational state. So, that’s what we did. 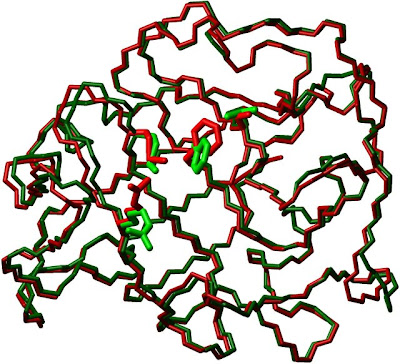 To the right you can see an overlay of structures for wild-type (WT) CypA (red) and S99T (green), aligned using structural elements on the opposite side of the protein from the active site. As you can see, the backbone traces match very closely, except for the helix and loop on the right. These elements are involved in crystal contacts in the S99T structure, but not the WT; a lower-resolution structure of S99T shows no differences here. Another key difference between these structures, of course, is the position of the side chains (thick neon); as shown here (and more clearly in Fig. 2c) they seem to have adopted the minor conformation from the WT structures. Although this mutation inspires widespread chemical shift changes (Fig. 3a) consistent with the hypothesis that this concerted side-chain rotation gives rise to the NMR observations, the structures seem very similar. Yet, S99T CypA differs from WT in two important ways.

The first difference is that the conformational fluctuations are dramatically slower, but only for residues that showed catalysis-related dynamics in WT (Fig 3d). In fact, this rate is now so slow that due to a quirk of NMR we can only determine the slowest rate of the process. At 10 °C, this fluctuation in S99T is about 60 times slower than the slowest process in WT.

The second key difference between the mutant and the WT is that catalysis is dramatically slowed. Because CypA does not consume its substrate (it acts on both cis- and trans- proline bonds) its activity can be assayed by NMR, as you can see in Fig. 4. As with any enzymatic assay, the net activity is proportional to the amount of enzyme added, so just glancing at these spectra (and knowing the enzyme concentration) you can estimate that S99T has at least 40-fold lower activity than WT enzyme. If you actually perform the fits, it turns out that the reaction velocity for S99T is about 240 times lower than that for normal CypA, but this includes a contribution due to the fact that S99T does not bind its substrate as tightly either. If you correct for this, it turns out that S99T has about 70-fold less activity than the normal enzyme. Not only is this similar to the change in dynamics, it’s also quite comparable to another mutation, R55K, that removes a group that performs some of the chemistry.

These results indicate that a conformational change in a group of side chains including F113 is primarily responsible for the chemical exchange behavior observed in WT. The S99T mutation stabilizing the minor conformation dramatically and similarly reduces both the conformational fluctuation rate and the catalytic rate. This suggests that dynamics and catalysis are linked not by happenstance but by some direct relationship. Unfortunately, these experiments do not provide any direct insight into the mechanism by which dynamics contribute to catalysis. They do establish, however, that in CypA coherent fluctuations of side chains, barely detectable in protein crystals, nonetheless make a critical contribution to function.

4 Responses to “Alternate structures and catalysis in cyclophilin”