Part of the motivation for my previous post about the spectral density was the recent appearance online (and upcoming appearance in print) of my paper in the Journal of Biomolecular NMR, which is open access, so you can open it up from home and read along as I tell you about it. The obscure-sounding title “Mesodynamics in the SARS nucleocapsid measured by NMR field cycling” means that we were able to characterize an interesting fluctuation in a protein from the SARS coronavirus, and that we used a cool technique to do it. 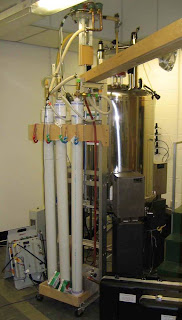 In the previous post, I mentioned that NMR dynamics studies ought to use data collected at multiple static magnetic field strengths. This is typically accomplished by increasing the strength, because of clear advantages in sensitivity and resolution at high and ultra-high field. Corresponding author Alfred Redfield, however, created a device (left) to capture information about relaxation at lower magnetic field strengths while retaining the advantages of, say, a 500 MHz magnet. This is accomplished by field-cycling, which in this case means physically moving the sample from the center of the magnet’s superconducting coil to a spot several centimeters away. If one has carefully measured the magnetic field gradient with respect to distance, one can reproducibly measure relaxation at a desired (lower) field within the bore of the 500 MHz magnet. 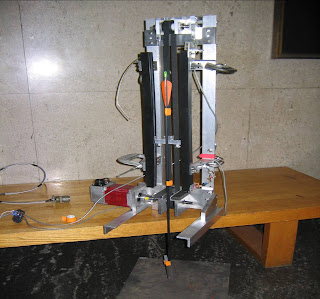 As you might surmise from the photograph, Al built the field-cycling device himself, often jury-rigged from whatever parts were convenient. For instance, as you can see at right, the push-rod that connects the sample in the tube to the motor assembly was made from an arrow purchased at a sporting goods store. I’ll count myself lucky if I’m half as creative and active in my 50s as Al is in his 70s. Al has used this device to investigate the dynamics of nucleic acids and lipids, but he was interested to see what we could learn about proteins by examining relaxation at low magnetic fields. Relatively low, at any rate — the weakest magnetic field I used is higher than you would typically encounter in, say, a clinical MRI. In his 31P research, however, Al has gone near zero field during the relaxation period. 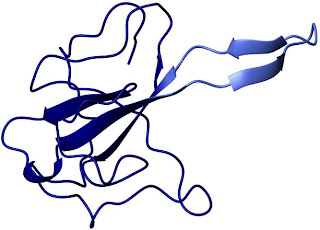 Elan Eisenmesser, now a professor at the University of Colorado Health Sciences Center, did some initial investigations using this technique on cyclophilin A, and edited the pulse sequences so they could control the field-cycling device. Unfortunately, the results in CypA were kind of boring because for that protein the dynamics on the ps-ns timescale are relatively homogeneous. At this time, Elan was also working on the N-terminal domain of the SARS nucleocapsid protein (henceforth SARSN). As you can see from the structure at left (explore it at the PDB), SARSN has a long β-hairpin (sticking out to the right) which is known to be flexible. The hairpin is thought to interact with RNA as part of the viral assembly process, as well as binding to several host proteins during the process of infection. As Elan prepared to move on, he passed the project to me, and with Wladimir Labeikovsky assisting for the first couple of months, I took a bunch of spectra under various conditions. 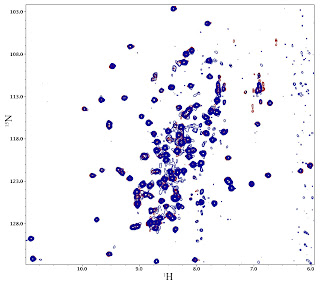 You can see what a low-field spectrum looks like at right: this is an HSQC from an R1 experiment where excitation and acquisition were performed at 50.7 MHz (15N) and the relaxation period took place at ~17 MHz (blue). I’ve also overlayed a spectrum collected entirely at 50.7 MHz (red). The peaks are all in the same place and the sensitivity is good, but the signal/noise ratio is clearly lower for the 17 MHz spectrum, and we get some sidebands from the water on the right side of the spectrum. Getting the water signal to behave was a significant challenge for these experiments and took several tries to get right.

Besides the experiments I performed personally, spectra were collected by Elan and Geoffrey Armstrong at the Rocky Mountain magnet facility (the 900 MHz R1 and NOE) and Karl Koshlap at the UNC Pharmacy School (500 MHz data). Karl’s involvement was necessitated by a change in sample conditions and the unfortunate incident our spectrometer had with an HDTV channel (chronicled here, here, and here).

In the end I managed to gather relaxation data from four high fields (using standard equipment) and two low fields (using the field cycler). The R1 data are shown in Figure 2, and if you read the previous post then they shouldn’t surprise you very much. For most of the protein, R1 decreases steeply as the strength of the static magnetic field is increased, but for a subset of amides this field dependence is substantially reduced. Most of these residues fall into a continuous stretch encompassing the β-hairpin of SARSN and an adjacent loop (shown on the structure in Figure 1). In addition, the heteronuclear NOE measurements for these residues show a very large RNOE/R1 ratio at 50 MHz that decreases substantially as the field increases (Figure 3). As I discussed in the last post, these patterns of field dependence are characteristic of flexible regions in a protein, but more specifically they indicate flexibility with an internal correlation time of around a nanosecond or so.

One might expect a large, relatively unconstrained feature like the hairpin to have flexibility on multiple timescales. In particular, it seems like the sort of structural element that might move with a time constant of microseconds or milliseconds. These slower motions can’t be fit with great accuracy using the experiments performed here, but evidence of their absence can be found in the R2 experiments performed at 500 and 600 MHz (Fig. 4). Assuming that they are correlated with changes in chemical shift, we would expect motions on this timescale to increase the R2, but in the hairpin this relaxation rate is substantially reduced, consistent with high flexibility on the nanosecond timescale (low S2).

In order to gain a more complete picture of the dynamics, I fit the relaxation data to model-free formulations of the spectral density. For most residues, the classic Lipari-Szabo formalism worked quite well, although the S2 are generally higher than I like. An analysis of the fits, however, indicated that many residues needed to be fit to a more complex model, called extended model-free or model 5. In this model the spectral density is given as:

where S2f and S2s are order parameters for a fast and slow internal motion, respectively, and τs is the internal correlation time for the slow motion (τf is assumed to be ~0). The residues that were fit to this alternative model happened to be those with anomalous R1 and NOE dispersions, meaning they mostly belonged to the β-hairpin and the loop incorporating residues 60-65.

Ultimately I didn’t include the low-field data in the quantitative fits. The large random errors in these rates (error bars in Fig. 2) meant that the more precise high-field data would dominate the fits, for one thing. For another, the low-field data were not entirely consistent with the high-field results. Although the general features of the relaxation at 17 and 30 MHz agree with predictions from high field, the observed low-field R1 differ substantially from predictions. This could be due to a number of error sources, the two biggest being positioning error and interference between the CSA and dipolar relaxation mechanisms (because we cannot suppress this interference in the fringe field). Al also thinks some of the error may be due to the influence of a low-amplitude fluctuation in the globular portion of SARSN. Qualitatively the R1 behave much as we would expect, but bringing them into line quantitatively will take more work.

The upshot of all of this effort to fit the dynamics is that the residues in the hairpin have an interesting duality. On very short timescales (< 10 ps or so) they are quite rigid, much like the rest of the protein. On a slightly longer timescale, however, they are very flexible, with S2s of around 0.6, and similar internal correlation times across the entire feature in the range of 600-800 ps (Fig. 5). Because the correlation time of this fluctuation is significantly faster than molecular tumbling but much slower than typical backbone fluctuations, Al called them “mesodynamic”, a word Dorothee seems to like. At any rate, these observations led us to propose that the hairpin fluctuates widely (based on S2s and τs) as a coherent structural unit (based on S2f), rather than having its strands fall apart and flop around randomly. The hairpin is both ordered and disordered, depending on the timescale of analysis and frame of reference.

The physical plausibility of this dynamic model was assessed using a pair of 15 ns all-atom molecular dynamics simulations performed by Ming Lei. What these found, shown in Fig. 7, was that the hairpin maintained its internal structure while moving freely with respect to the globular portion of the protein. In addition, the simulations suggested a reason the 60-65 loop had similar dynamics to the hairpin — transient hydrogen bonds formed between side chains in the hairpin and residues in the loop, causing their motions to be correlated.

The qualitative agreement between the low-field and high-field data supports our contention that this technique can be made to work and to give valuable data about certain kinds of fluctuations. Future work on proteins with this technique will require a rigorous approach to control for the systematic bias we observed. Additionally, this study re-emphasizes the value of taking relaxation data at many fields in order to fully characterize biomolecular dynamics.

As for the dynamics of SARSN, the finding is interesting but doesn’t yet provide any specific insight. Disordered regions of a protein are often associated with promiscuous binding activity, and this hairpin is no exception. However, the existence of multiple binding sites in one of these regions is usually attributed to a significant ability to restructure itself. Here, that possibility would seem to be limited by the apparent persistence of the hairpin’s intrinsic structure. The ability of the hairpin to move freely while maintaining a particular internal arrangement may have advantages in capsid construction, an idea that could potentially be tested by inserting prolines or glycines in the β-strands, which should disrupt the hydrogen bonding that preserves the hairpin.

Al and his collaborator Mary Roberts are currently continuing their investigations of 31P dynamics in nucleic acids and lipids using low field. They’re even advertising: 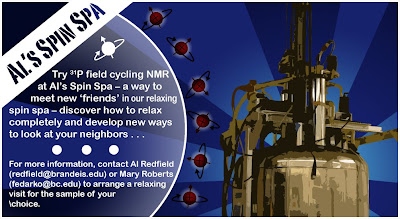