The ribosome produces proteins by matching tRNA that has been correctly loaded with an amino acid to a codon (triplet of DNA bases) in the mRNA that contains the gene sequence. The triplet code allows 64 combinations of nucleotide bases, but proteins are made from only 20 amino acids (plus a “stop” signal). This means that most amino acids are coded by multiple codons, and hence have multiple tRNAs. Not all codons are created equal, however; in bacteria some codons are found much less frequently than others that represent the same amino acid. The tRNA associated with these “rare codons” is also less abundant than other tRNA, and this means that when a ribosome hits a rare codon, it often has to pause while it waits to encounter a loaded tRNA. To structural biologists like myself, who do their work by overexpressing proteins in bacteria, rare codons can be a nuisance because they slow down protein production, or even prevent it entirely. In a recent paper in Nature Structural & Molecular Biology, however, researchers from Germany suggest that the slowdown due to rare codons may have a functional advantage in vivo.
As a first step, Zhang et al. used a bioinformatics approach to survey the sequences of bacterial genes so that they could identify patches that would be slow to translate (the Methods section appears to contain an error in the description of this technique). They found that for proteins longer than about 300 amino acid residues, nearly every transcript contained at least one cluster of slow-translating codons. When the authors used a cell-free E. coli expression system to make some of these proteins and allowed only one round of translation initiation per ribosome, they saw a pattern of translation intermediates that matched the sizes predicted by the location of slow-translating patches. 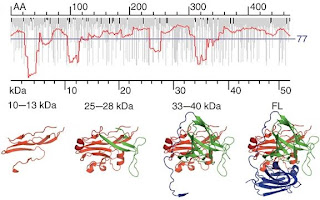 In order to find out whether these translation intermediates had any significance, the authors examined the multi-domain protein SufI. In their prediction of the translation speed, which is on top in this figure that I have shamelessly stolen, there are four slow spots. Aside from the first one, these appear to correspond to the boundaries of different structural domains in the protein (lower part of the figure). Experiments with proteases suggested that these domains actually folded during the pauses, as the ribosome-bound translation intermediates were resistant to proteolysis.

Interestingly, when two rare leucine codons were replaced by more common ones (the authors call this SufIΔ25-28), the whole protein became vulnerable to degradation. Similarly, when extra tRNA for these rare codons was added to the cell-free expression system, the full-length protein became protease-sensitive. This suggests that the slow patches are actually necessary for proper folding of the protein. It’s often the case that lowering the incubation temperature can improve the expression of certain proteins in E. coli. The authors of this study find that is also true for SufI, as the protease resistance of SufIΔ25-28 can be restored by lowering the temperature, and thus the overall translation rate. When analogous experiments with SufIΔ25-28 and tRNA supplementation were carried out in living E. coli, the translocation of SufI into the periplasmic space was reduced by a factor of 10 even though the overall protein concentration was not affected, indicating that the co-translational folding allowed by the rare codons is necessary for proper functioning of the protein in vivo.

Of course this is a single case study, and it would be premature to conclude that every patch of rare codons corresponds to an important co-translational folding event. Indeed, that doesn’t even appear to be true of SufI, which folds properly when one of its other slow patches is removed. However, at certain key locations these stretches of rare codons may be an important part of the folding machinery in multidomain proteins. In addition, the more frequent appearance of rare codons in β-strands (as opposed to α-helices) may also be related to folding due to the slower kinetics of β-sheet formation. As the authors note, the intrinsic kinetics aren’t everything — pauses in the translation process may also buy time for the complex to encounter essential chaperones or cofactors. Regardless of the mechanism, it appears that rare codons, in at least some instances, provide a way for the folding process to catch up with the translation process.

2 Responses to “Rare codons give domains time to fold”