While reports of my man-crush on Brian Volkman are in general much exaggerated, it is true that I adore one of the systems he studies, the bizarre chemokine lymphotactin. In case you couldn’t guess from past posts here, I am endlessly fascinated by this protein, and so I was very happy to finally see his latest paper on the subject in today’s feed-dump from PNAS. Previously published research out of Brian’s group indicated that lymphotactin adopted two totally different structures under different solution conditions. The new paper provides high-resolution structures of the non-chemokine fold and demonstrates that the structures have distinct activities, both of which are essential for full lymphotactin function in vivo. 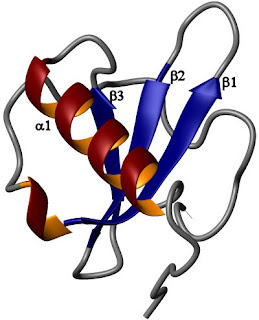 Lymphotactin is a chemokine, a small protein which has the property of binding to molecules in the extracellular matrix (ECM) such as long polysaccharides, and also of activating certain G-protein coupled receptors (GPCRs). A previously-solved structure of lymphotactin (left) displayed a normal chemokine fold (explore this structure at the PDB), which is designated Ltn10. However, in order to get this structure by NMR, the Volkman lab had to either engineer in a second disulfide bond (as in this structure), or acquire their data under very specific conditions (10 °C, 200 mM NaCl). The reason for this is that at under reasonable biological conditions (37 °C, 150 mM NaCl), their spectra showed evidence of an alternate conformation. At higher temperature and lower salt, the peaks corresponding to the structure at left disappeared entirely and were replaced by peaks corresponding to an alternate conformation. 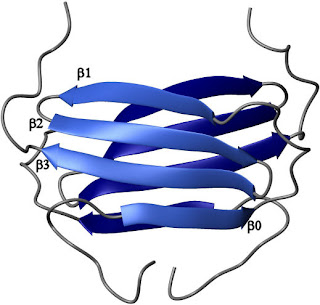 You can see that alternate conformation, called Ltn40, at right (explore this structure at the PDB). As you can see, this structure is dimeric, taking the form of a β-sandwich. The β-sheets themselves have a sort of Greek key meander arrangement. You can learn more about β elements, protein topology, and protein structure at Larry Moran’s Sandwalk. This new fold buries a substantial number of hydrophobic side-chains between the β-sheets. At the same time, a preponderance of positively-charged residues is exposed to solution. The α-helices of the chemokine structure appear to unfold completely, a new β-strand forms at the N-terminus, and the existing sheets shift their hydrogen-bonding register by one residue, meaning that β1 and β3 are rotated 180° along their lengthwise axes.

The existence of two native folds under reasonable physiological conditions (Keq near one at 37 °C) poses two questions. The first is whether and how fast the structures interconvert. The fact that the equilibrium of a given sample can be shifted with temperature and ionic strength implies that this is an active equilibrium, i.e. that the energy barrier is low enough to cross using just thermal energy. Tuinstra et al. used an NMR experiment to establish that interconversion takes place on a timescale of about 100 ms.

The second question that naturally comes to mind is whether the two structures have different functions, and what those functions are. With a few clever experiments in which they used mutations to stabilize one fold or the other, Tuinstra et al. demonstrated that only the Ltn10 fold activates the partner GPCR, and only the Ltn40 fold binds to heparin, a polysaccharide often found in the ECM. Thus, neither fold possesses the full range of biological functions of lymphotactin; in order to fulfill its biological role it must switch between these structures in vivo. Moreover, the exclusivity of these functions between folds naturally suggests a switching mechanism for regulation.

This is an interesting and important finding because it is (so far) the only example of a protein adopting two completely different stable folds with no hydrogen bonds in common at equilibrium. Trivially, natively disordered proteins adopt multiple conformations under physiological solution conditions, and many proteins alter their conformations in response to ligand binding while keeping most of their hydrogen bond network intact. In this case, however, an existing network of stabilizing bonds is completely disrupted in order to form a new fold with a totally different function. I’ve already discussed some of the implications of this with respect to protein folding, and in regards to the recent transitive homology studies out of the Cordes group. Lymphotactin offers lessons and ideas for protein folding and evolution that must be taken into account. In particular, the fact that point mutations can significantly stabilize one or the other of these structures implies that there may be previously unsuspected shortcuts through structural space between folded states that avoid unproductive or energetically unfavorable molten globules.

In addition, these results signify that the Anfinsen paradigm that dominates our understanding of protein structure ought not be taken for granted. In many cases it is true that a peptide sequence uniquely determines a single structure under all physiological conditions. Of course we have known for some time that certain peptide sequences do not produce ordered structural ensembles at all. What the lymphotactin example makes crystal clear is that a given sequence can yield an ensemble with multiple energetic minima that reflect related but topologically distinct structures. Tuinstra et al. suspect that this phenomenon has not been noted previously because structures of this kind would not be amenable to crystallization, or would only crystallize in one (of many) structures. If this is so, then as more and more proteins are studied using solution techniques under physiological conditions we may find multiple structural minima in a variety of proteins. Such discoveries may significantly enhance our understanding of the protein regulation, function, and evolution.