I know, I know… you’re pretty darn sick of seeing me beat up on corn ethanol in this space. To be honest, I’m a little sick of it, too. However, the idea is so appealing on its surface, so desirable to the agricultural lobbies, and so pernicious in its environmental effects that I feel I have no choice but to do whatever I can to publicize the very good research indicating its flaws and dangers. Increasing awareness of the problems associated with corn ethanol mandates is the only way to kill that horse and make it stay dead. The corn ethanol lunacy of our would-be Presidents was most clearly on display before the Iowa caucuses, but don’t think just because the politicians aren’t talking about it that the issue has gone away.
So that’s why I’m talking about a paper (now in PNAS
preprints) by Simon Donner and Christopher Kucharik on the effect of corn ethanol on the oceans (1). Given that we do not actually grow corn in the ocean, this might seem like a bit of a stretch. But the existence of rain and rivers means that what we put in the soil almost always ends up in the sea, where it often has significant effects.

The problem corn causes for the ocean is hypoxia. As you should be aware, there is an enormous (>22,000 km2) seasonal hypoxic region or “dead zone” in the Gulf of Mexico. Fresh water efflux from the Mississippi bearing significant concentrations of nitrogen-rich fertilizer is believed to cause the hypoxia primarily through eutrophication. Beyond being undesirable on its own merits, the dead zone puts fisheries at risk, and eutrophication can contribute to toxic algal blooms. So whether you care about the environment or the economy of coastal regions you have good cause to want to mitigate nitrogen fertilizer pollution. 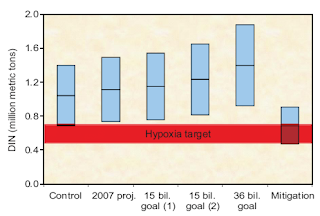 But that’s a problem, because corn is a pretty fertilizer-intensive crop. Given that making ethanol for transportation from corn starch will probably require a significant increase in corn production, Donner and Kucharik asked what effect the changes in agriculture would have on the amount of dissolved inorganic nitrogen (DIN) exported to the Gulf of Mexico. I have shamelessly stolen the figure to the left for your benefit. As you can see, they tested their forecasting model against several scenarios. The control was just to check export for the years 2004-2006 using the model against known data. The 2007 column is a prediction for last year. Then they get to the models forecasting export in the case of 15 billion gallons of production under two land-use scenarios, and a situation where radical changes in land use allow the production of all 36 billion gallons of mandated biofuels as ethanol from corn. As you can see, none of these situations even come close to reducing DIN to desired levels, though arguably the “optimistic” (left) 15 billion gallon scenario isn’t too much worse than the status quo.

Of course, there is that last one, which reflects a Panglossian possibility in which red meat production is cut in half, the corn once destined for feed is repurposed for ethanol, and wetlands that filter out 35% of DIN are created around all corn and soybean farming land. Basically, this plan depends on a dramatic increase in the popularity of vegetarianism, as well as some extremely unrealistic behavior by farmers and federal land planners. The upshot of it all is that reaching biofuel production goals through corn ethanol is almost certain to increase the amount of nitrogen reaching the Gulf. Of course, this is a computer model of future outcomes, and as such, the results reflect the assumptions made in the construction of the model. However, the authors generally appear to err on the side of favoring ethanol. In the “optimistic” 15 billion gallon model, for instance, annual yields continue to increase without any additional fertilizer use per plot.

Of course, this will be a problem for other biofuels as well. Switchgrass can be grown on marginal lands with decent yields. However, biofuel demand will create an economic incentive to improve output; one convenient way to do this is to fertilize. Even if a relatively small amount of fertilizer is used on every switchgrass plot, that will still be an enormous increase over the amount of fertilizer used on those plots previously (i.e. zero). The ill effects of poorly-conceived biofuel initiatives will not be limited to economic disruptions and increases in greenhouse gases—enormous tracts of biofuel monocultures will have pronounced effects on ecosystems nearby and downstream. Before we take the plunge on massive initiatives we need to study the outcomes, and ask whether what we are doing achieves more harm than good. Too bad our would-be leaders only seem interested in pandering for votes and campaign funding.