Well, the papers for which Ming produced his fantastic molecular artwork came out in Nature last week. There were two, as some of you might have noticed. Although the larger paper was probably more technically impressive, I’m going to skip over it and talk about the second Henzler-Wildman et al. In the interest of full disclosure, I will point out that although I did not work on this paper, those who did are in my lab. So, either I am a homer or this stuff is so exciting that I still want to write about it even after hearing it rehashed endlessly for more than a year. The question at hand is the nature of protein conformational changes. Specifically, the paper is meant to address whether motions on the timescale of nanoseconds to picoseconds are indicators of slower motions, and if so, what kind of indicators they are.

I don’t mean to set up a false dichotomy here, but in order to set up this discussion it’s most convenient to describe two extremes of an expected spectrum of behaviors. At one extreme of the spectrum we have a sort of “ball-and-string” model of protein behavior, in which slow motions generally reflect coherent motions of larger structural units with intervening regions of flexibility serving as “hinges”. This would tend to produce the energy landscape shown at left, with two minima separated by a single large energy barrier, with perhaps a very low population of an intermediate state. Such a model predicts true two-state behavior in the slow time regime. On the fast timescale, dynamic behavior will be heterogeneous, with residues in the “ball” showing rigidity while residues in the “strings” are flexible.

As an alternative extreme, one could imagine a “jello” model of protein dynamics. In this model, domains or subdomains “wiggle” into new positions primarily through incoherent motions that occasionally produce a coherent shift. Thus, two well-populated minima might be separated by several intermediates with relatively low energy barriers (example energy diagram at right). If this is the case, one would expect the behavior in the slow time regime to be less clearly two-state (because the intermediates are all populated) and for the fast timescale dynamics to be fairly homogeneous and reflect significant flexibility. In the ball-and-string case the transition rate is governed by a monolithic energy barrier, while in the “jello” case the transition rate is limited by frustration.

I want to re-emphasize that this is not an either-or proposition. It is likely that both extremes are present in nature. Also, the ball-and-string extreme is really just a special case of the jello view. So what this paper cannot do is establish “how proteins move”. However, it can establish how a particular protein moves and also indicate what techniques to apply to answer the same question in other cases.

The particular protein being studied in this paper is adenylate kinase, which I will refer to as Adk, a highly conserved protein that is present in nearly all forms of life. Its function is to convert one ATP and one AMP molecule into two ADP molecules and vice versa. Adk has two interesting properties. The first is that it is an equilibrium enzyme, which is to say that it catalyzes the phosphotransfer equally well in both directions. This is a useful feature to have in NMR studies. Additionally, although it is highly conserved, the slight differences in sequence between Adk from the intestinal bacterium E. coli (mesoAdk) and the hyperthermophile A. aeolicus (thermoAdk) produce enzymes that have very different thermal stabilities and activities.

Adk is a single fold with three subdomains: a “core” and two “lids”, one of which typically binds AMP and the other ATP. It has previously been shown that the opening of these lids is the rate-limiting step of Adk catalysis, for both mesoAdk and thermoAdk. More recent research, published in a separate letter to Nature last week, indicates that these lids open and close even when the substrates are not present. The question then is whether the motion of the lids more closely resembles the ball-and-string model or the jello model. Henzler-Wildman et al. modeled thermoAdk and mesoAdk fast-timescale dynamics in order to resolve the question. 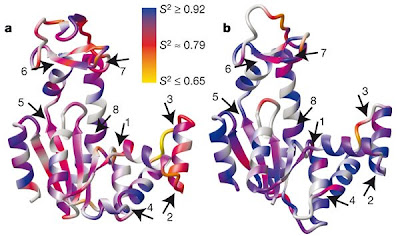 I have shamelessly stolen their first figure for your benefit. The order parameter S2 is shown on the structure of mesoAdk (A) and thermoAdk (B). Both datasets were taken at 20 °C, a temperature at which mesoAdk is very active and thermoAdk is not. Just to orient the non-NMR people, for a structured protein one expects most of the bond vectors to have order parameters between 0.8 and 0.9, so even the red residues in these structures are not really all that unusually flexible. Also note that the AMP lid is located at the right end of these structures (folding over at hinges 1-4) while the ATP lid is at the top (hinges 5-8). It should be immediately apparent that thermoAdk is more rigid than mesoAdk. A more subtle point is that many of the “hinges” identified from crystal structures have increased flexibility relative to their surroundings. Also, although the lids (especially the ATP lid) are more dynamic than the core, they retain order parameters characteristic of folded proteins.

This is in contrast to earlier research from the Meirovitch lab, which indicated substantial nanosecond flexibility in the ATP and AMP lids (LID and AMPbD in their description). The supplementary information for Henzler-Wildman et al. is freely available and contains a good discussion of the discrepancy. For those who find it too technical, it can be summed up as follows: the Meirovitch group improperly applied an isotropic global rotational diffusion model, and their SRLS results produce order parameters that are inconsistent with the domains being folded. Moreover, the correlation times they derive with their method appear to be too close together to be reliably distinguished with the NMR data they collected. The Henzler-Wildman results are consistent with the previous relaxation dispersion data for Adk and also with molecular dynamics simulations (contained in the paper). If Katie reads this, perhaps she can elaborate on the reasons why her data is superior. Commentary from the Meirovitch group is also welcome.

Let us will continue on with the paper. As I mentioned, there is a bit of MD in there which supports the NMR findings. What I found to be more interesting, however, was the way that the dynamics of thermoAdk reacted to temperature. Because thermoAdk melts at a very high temperature, it was possible to measure its dynamics all the way up to 80 °C, although glycerol had to be added to the solution at this temperature in order to bring the tumbling rate back down to a point where internal and global correlation times could be reliably separated. The results, which you will have to read the paper to see because I forgot to email myself the figure from work, indicate that as the temperature increases the order parameters decrease (expected) and become very similar to those of mesoAdk at 20 °C. This matches up nicely with the results of activity studies which indicate that the activity of thermoAdk at the high temperature is similar to that of mesoAdk at the low temperature. Because it is known that the lid opening is rate-limiting, and because local deformations at the hinges are required for the lids to open, it is likely that the increased fast-timescale flexibility of thermoAdk hinges at high temperature is directly related to the increased activity of the enzyme at that temperature.

The dynamic results in this paper seem to support the ball-and-string view of motions in Adk (by contrast, the Meirovitch results would suggest the jello view). Although the lids are not as rigid generally as the core, their order parameters are still within a reasonable range for a folded protein, and are for the most part higher than the order parameters of residues located at reasonably well-defined hinges. In Adk, motions on the μs-ms timescale appear to be enabled by flexible hotspots that lie between well-defined elements of tertiary structure, with the overall ensemble dominated by the two discrete endpoints. For this case and others like it, a combination of relaxation dispersion measurements and model-free analysis suffice to characterize the motions.

For cases which more closely match the jello view, many NMR approaches may prove difficult to implement. Relaxation-dispersion analysis of such motions is likely to be frustrated by endpoints that constitute a slim majority or plurality of the ensemble, high rates of interconversion between similar conformers, and possibly a low Δδ for these conformers. Fast-timescale studies will be difficult because the motions involved will be complex and may violate some model-free assumptions. In such cases, high-field measurements of R1 dispersion (yes, I said it) may prove especially valuable as the dominance of ωN in those measurements at least gives us a chance of distinguishing motions in the high-ns regime. Of course, the major difficulty for NMR will be if the jello motions result in intermediate exchange and excessive signal averaging — in these cases paramagnetic spin labeling or EPR studies may prove to be the only practical method.