Another article entering the preprint stage last week also has some history behind it, although it doesn’t have quite the wayback machine mojo of the last articles I discussed. A collaboration between researchers at Radboud University Nijmegen and the University of Pisa produced a really interesting story about the protein tyrosine phosphatase PTP-BL (citation 1 below). Like many phosphatases, PTP-BL is a large, multi-domain protein; it is typical to view these domains as independent functional units and see their conjunction in a protein as just a form of scaffolding. In the case of PTP-BL, however, it appears that the domains interact with each other, and that this has consequences for their binding specificity. In addition, their results agree with previous work identifying allosteric networks in the PDZ domain.

However, the interesting part of this story starts almost a decade ago with a bioinformatics experiment carried out by Lockless and Ranganathan published in Science (citation 2 below). Standard bioinformatic analysis of homologous proteins involves aligning their sequences based on similarity and looking for residues which are conserved across evolutionary time and space. It is generally believed that invariant residues are essential to either the structural integrity of a given protein fold or its function. Lockless and Ranganathan decided to take this a step further and ask which residues were co-conserved with a particular amino acid position, that is, whether amino acid changes at some position X are correlated with changes at some other position Y. They performed this experiment using the PDZ domain, a very common ligand-binding domain that appears in multiple proteins (and often in multiple copies within the same protein) in nearly all eukaryotes as well as bacteria. As the target of their co-conservation analysis, they chose a histidine in the binding cleft of PDZ. 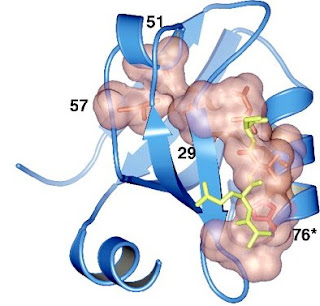 Naturally, one would expect other residues within the binding site to show co-conservation, and this is indeed the case. The surprise, however, comes from the fact that in addition to these expected residues, an additional patch of residues on the opposite side of the domain also appeared to be co-conserved with the histidine, as shown in their figure at right. The histidine in question is residue 76, and co-conserved residues are rendered with pinkish molecular surfaces. The peptide bound by this particular PDZ domain is shown as yellow sticks. What you can see here is that there appears to be some linkage in an evolutionary sense between residues in the active site and residues in the β-strand structure on the other side of the protein. Lockless and Ranganathan did some binding studies that seemed to support their findings, and attributed this apparent pattern to structural perturbations.

A few years later, NMR virtuoso Ernesto Fuentes performed an NMR dynamics study on the second PDZ domain of human protein tyrosine phosphatase 1e (citation 3 below), in which he compared side-chain dynamics of the free (isolated) domain to those of the protein in a ligand-bound state. The results of that study are remarkably similar to those of the Lockless and Ranganathan work, though not identical. The ligand is shown in green, while side-chains of dynamically-responding residues are shown in red, yellow, and blue. As expected, most of the dynamic changes upon ligand binding occur right next to the binding site. However, two distal surfaces of the domain also appear to feel dynamic effects from the binding of the peptide. This gives even more direct evidence of some kind of allosteric interaction between the binding site of a PDZ domain and parts of the protein that are further away.

The new paper by van den Berk et al. puts a kind of exclamation point on this story. Their effort began, essentially, as a fishing expedition to find what peptides exactly the various PDZ domains of PTP-BL—it has five total—bind. Among others, they found that PDZ2 would bind to peptides from APC (binding site -VTSV) and RIL (binding site -VELV). This was the case when the PDZ2 domain was tested alone. When a construct containing both the PDZ1 and PDZ2 domains was tested, however, the RIL peptide no longer bound to PDZ2. This was true whether or not the 200 amino-acid linker between them was included in the construct, indicating that a bona-fide interaction between PDZ1 and PDZ2 was responsible. 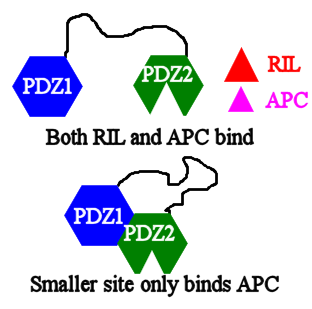 van den Berk et al. then used NMR chemical shift perturbation mapping to identify the binding site of PDZ1 on the PDZ2 domain. They found, in what should hardly be a surprise at this point, that the primary site of interaction is a distal surface of PDZ2. On the basis of modeling studies they suggest that the mobility of Ile 48 is critical to enabling the binding of the bulkier RIL peptide; they attribute the allosteric effect of PDZ1 to a restriction of PDZ2 Ile 48 so that it cannot move out of the way and allow RIL to bind. Thus we come to the model at right. Note that van den Berk et al. did not, as far as I can tell, determine what part of PDZ1 binds to PDZ2. It’s possible that the normal binding cleft is used, but the binding site on PDZ2 looks like a broad hydrophobic surface rather than a narrow structure that could easily insert into a binding cleft. This suggests that the binding site on PDZ1 is still available, and thus that peptide binding to PDZ1 could fine tune the behavior of PDZ2.

The functional importance of this change in affinity is not yet clear. RIL is also bound by another PDZ domain in PTP-BL, so the PDZ1-PDZ2 interaction does not abrogate RIL binding. Additionally, even in the absence of PDZ1, APC has a higher affinity for PDZ2 than RIL, so the PDZ1-PDZ2 interaction is not really switching the target of PDZ2 or anything. However, if the local concentration of RIL is significantly higher than APC, improved specificity for APC may be necessary for kinetic reasons. Alternately, the improved APC specificity may be an incidental feature of an interaction that evolved for another reason, perhaps to bring APC into close proximity to some protein bound to PDZ1.

The possibility that allosteric communication pathways might exist in small protein modules like the PDZ domain was initially met with a great deal of resistance. The classic descriptions of allosteric and cooperative interactions all involved very large protein oligomers. Dynamics experiments like those carried out by Fuentes et al. and functional studies such as this one, however, have borne out the predictions of the bioinformatics studies. Allostery, or the potential for allostery, is a feature of small, isolated domains just as it for large protein assemblies.

Another point to keep in mind out of this paper is that it is a mistake to assume that domains within a protein are completely independent. It turns out that this is often the case, that, for instance, a binding domain and a catalytic domain exist together without really interacting, and when that happens it’s not a problem to analyze each domain separately. However, domains within a protein can and do interact with one another, even when they are separated by sizable linking regions (the linker here is >200 amino acids). Often the easiest (and sometimes the only) way to investigate the structure of large proteins is to look at their domains individually. This paper, among others, is a reminder that this strategy is not always appropriate and may fail to capture important features of the domains’ functions.