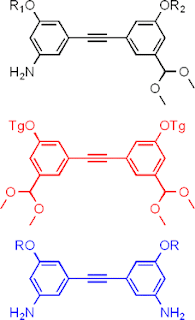 An interesting article appeared in JACS ASAP today from C.S. Hartley and J.S. Moore at UIUC on a clever way to direct the assembly of an asymmetric macrocycle. The approach relies on a simple idea to address a fundamental question about nanostructures, namely, how to make sure they assemble themselves as we would like. Given that protein design still isn’t quite far enough along to create any product we desire, we have to rely on more conventional chemistry. The basics of the approach should be obvious from the image on the right (shamelessly stolen from the paper). Note the reactive groups on the lower side of these compounds; even without knowing the relevant chemistry it should be clear what mechanism for directed assembly is implied. Given that the smallest geometrically stable assembly consists of three units, and that entropy favors the creation of small assemblies and enthalpy dislikes dangling functional groups, it should be obvious that dumping all these into a reactive pot should mostly produce units that have a composition of 1-1-1 or 1-2-3. 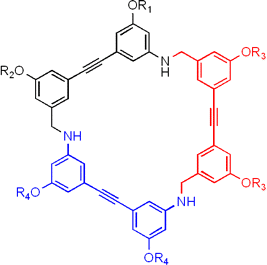 This is in fact what the authors observe when they perform the experiment, though they find (perhaps surprisingly) that in mixtures of all three components the 1-2-3 macrocycle predominates. Glancing at the product it’s clear that the macrocycles themselves will assemble into stacked arrays given the right conditions. If covalent chemistry is used to control this assembly, one has a rather simple method that could be used to construct fairly complex structures. Also, the yields from these reactions were encouragingly rich in the desired molecules, suggesting that only a little further optimization is necessary to produce effective scale-up.
Nothing in the paper is particularly earth-shattering, but then again, the cleverest answers often seem blazingly simple in hindsight. Hartley and Brown have come up with just such an answer here, in a commendably clear and readable paper.

One Response to “Automation for your nanodevice assembly”